Home
Best practice
This Australian media organisation achieved a 50/50 gender split in two years. So can yours.

This Australian media organisation achieved a 50/50 gender split in two years. So can yours.

So achieving a 50/50 gender split in experts and sources quoted in the media might seem like an ambitious target. The Australian Broadcasting Corporation (ABC) has proven that it is doable, and in less time than one might think.

In 2018, the split of men/women as experts and quoted sources was 70/30 (men/women). Just two years later, in 2020, ABC News achieved 49/51 representation [2]. It took commitment and determination from the organisation and its employees, and a willingness to question and change the way they did things.

What did the ABC do?

The ABC’s efforts to achieve an equal gender split began in December 2018, when the ABC 50:50 Project kicked-off. The organisation tackled two areas: (1) content and (2) more participation of women as experts and contributors.

The ABC experimented with new and different topics, prioritising women’s experiences and perspectives. They tracked audience demographics data to gauge the success of the stories with women audiences, and decided to change tactics if they were not hitting the mark.

Increasing the number of women contributors

When reaching out to organisations for comment, if organisations nominated men as representatives, the ABC would go back and ask if they had a qualified woman instead.

The ABC did a community call out asking women to self-nominate if they were experts in a certain field, for which they received around 4,000 responses.

In another example of using data to monitor change, teams at the ABC started tracking the gender of interviewees and bringing the data into regular editorial meetings. Then, teams would have discussions about the data, enquire where they could do better, and brainstorm changes that could be implemented for next time. It remains that they always interview the best person for the story, regardless of gender.

Why is this important?

With so many information sources to choose from, media outlets benefit from telling stories that are interesting to a wider audience. Diverse stories told by diverse people ensure any media outlet that they are relevant to more Australians.

Australia’s Women in STEM Ambassador, Professor Lisa Harvey-Smith, reminds organisations that they are a powerful collective in enacting change. “If Australian organisations take the lead on changing the gender representation in workplaces, we will be better positioned as a country to achieve gender equity.”

“Research shows that, in order for youth of diverse genders and backgrounds to aspire to any future career, they need to see that there are diverse experts out there. Increasing the diversity of spokespeople employees should be a priority of any organisation”, she adds. 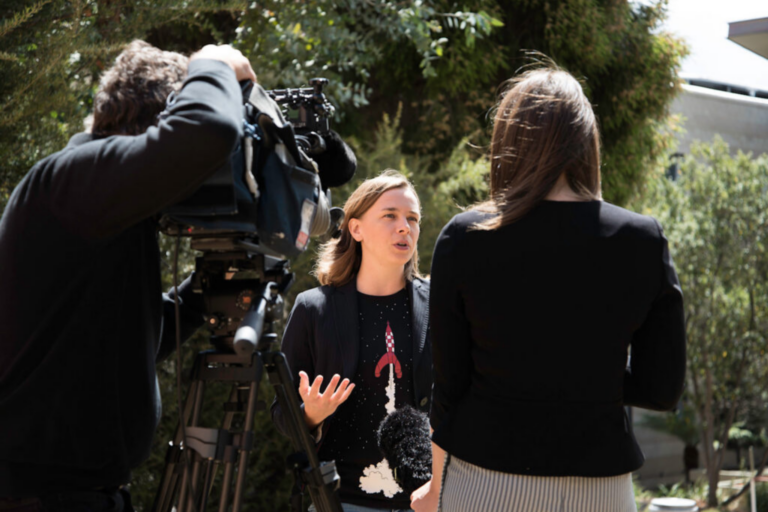 What can you do?

Invite in representatives of women’s networks across different industries and ask them what they see as the problems, and the change they want to see. The Workplace Gender Equality Agency (WGEA) and Women in Media are good places to start.

Many organisations are grappling with this issue, in Australia and worldwide. Reach out to other media organisations, industry networks, universities and think tanks that might have useful insights to share.

Be willing to do things differently

Avoid defaulting to calling the established contacts. For STEM-related expertise, use the STEM Women database to find experts. Similarly, when contacting organisations for interviews and comment, ask if there’s a woman, or someone from a diverse cultural or and linguistic background, that can speak about the topic.

Speak to the ABC directly!

Consider how to increase cultural and linguistic diversity, Indigenous representation, and the voices of people living with disabilities.

About Australia’s Women in STEM Ambassador

The Office of the Women in STEM Ambassador is an Australian Government initiative to address gender equity in science, technology, engineering and mathematics (STEM). Led by Professor Lisa Harvey-Smith, the Office promotes awareness of STEM careers to young people, parents and carers, and works with educators to challenge gender stereotypes and promote inclusive and engaging STEM education for all. The Office works with stakeholders across government, education and training, research and industry sectors to drive cultural and systemic change to institutions and workplaces that remove structural barriers and enable the full participation of women and girls in STEM education and careers.

Clara Gomes is a communicator and writer. She likes to use writing as a way of sharing practical solutions that help create a more equitable STEM sector in Australia. As the Digital Content Officer for the Office of the Women in STEM Ambassador, Clara creates, edits and shares content on the Office's social channels and website.

Read our other publications

The Office of the Women in STEM Ambassador supports publications about women's participation in STEM in Australia. Click to find out more.

Explore science communication programs for women in STEM, podcasts about STEM gender equity and other resources. Click to find out more.